So I may have been a little way off in suggesting that because the Belgian Nats were the day before, this race would be easier. I couldnt have been more wrong. The course was good fun, but an absolute slogfest. Thick soupy mud covered the second half of the course, the rest consisted of slippery grass, tarmac and some stairs. Despite having had 3 races already, I hadn't had a barrier until today. Interesting.... Anyway, we found our car spot next to Yannick and Niels Albert's massive campervan. 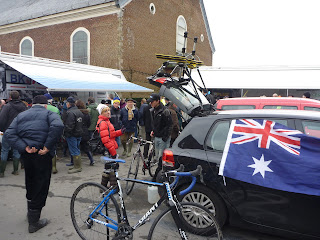 This race is generally an affair put on for the National Champ to show off his new kit. The organisers were keen to get riders to race, and as such I recieved 65 euros just to start, pretty cool! I was also informed I would recieve a meat platter afterwards, I thought it was just meat, but it was an actual meat grill, which should come in handy over the next month. 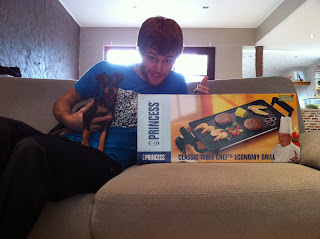 The race started as many do, and I did my best Steven Bradbury of hanging back and waiting for a crash to move up a few positions. The inevitable happened, and I gained a few spots, but unfortunately it was Yannick who came down, puncturing his tubular. Soon enough the other riders past me, and I was out the back, keeping the tailenders in sight for a few laps.
Rita (from the race where I got 2nd) was taking some photos today too... 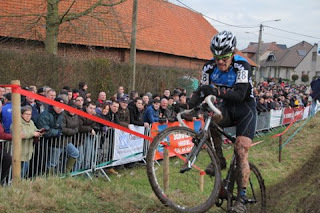 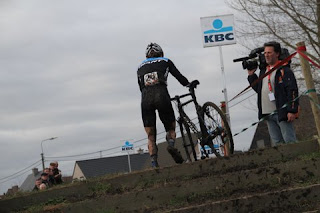 Luckily for me, the 80% rule didnt apply here, and I got lapped by the leaders with one lap to go (for them). By this stage my race was over anyway, so I decided to play up for the crowd a bit, much to their enjoyment. I took a shot of liquer (Baileys or something?) from a spectator and nearly vommed straight after, but they went mental! Then as Albert passed me, I chased after him and caught him up on a little hill. The crowd went insane, and poor Albert thought someone was actually catching him, until he saw it was just the hack who he lapped.
Mario Dalschaert snapped an excellent picture of this moment... 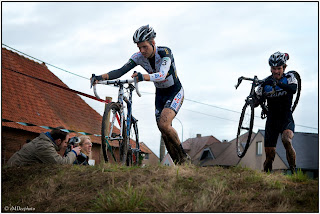 I may have been the last finisher (there were quite a few DNF's), but I had an absolute blast playing up for the crowd, and I wasnt a ridiculous way behind, considering the small but quality field.

Thanks again for everyones support. World Cup Lievin is up next!
Posted by Rat at 05:15

Following the rapid rise in the standard of Cyclocross locally, I will be competing in my second season overseas in Europe. I'll be racing World Cups, some Superprestige and B-Post Bank Trophee races, filled in with some local races here and there. If all goes well, I'll be heading to Louisville, KY to compete in the World Champs in Feb!